Are you ready for a corn-ucopia of knowledge?

Whether you celebrate Indigenous Peoples Day or Columbus Day, the transition to fall foods has us thinking about the Three Sisters. Who are these sisters you ask? According to Iroquois legend, corn, beans, and squash are three inseparable sisters who can only grow and thrive together. Read on to learn more about why!

This tradition of interplanting corn, beans and squash in the same mounds, is a sustainable growing system that provided long-term soil fertility and a nutritious diet for an entire community. Corn, beans and squash were among the first important crops domesticated by ancient Mesoamerican societies. Corn was the primary crop, providing more calories or energy per acre than any other. According to Three Sisters legends, corn must grow in community with other crops rather than on its own – it needs the beneficial company of its sisters. So the next time you take a look at any of these delicious veggies - remember to look out for the other sisters!

Last week we told you all about the delicious new menu items we've added to our lunch menu but let's not forget about our breakfasts and snacks. We've got some  fun additions to your mornings and afternoons. They're inventive and scrumptious so start salivating as you check out the pictures below!

New Dishes Fresh From the Kitchen

Our Chefs (Calvin, Nick, Liliana, Corey and Josh) have been keeping our kitchen warm this winter imagining, testing, crafting, measuring and cooking up some creative new dishes. Check out the highlights below!

It's cold out and the days are shorter but rest assured there are definitely some positives that come with the winter season - new winter menu items!  We love to hear how the kids are enjoying the food and we're open to your feedback after they've tried each item a couple of times!

The colors are changing, the hats and scarves and coming out, and the leaves are falling! As the seasons change, we have new items coming to a plate near you. Whether for breakfast or snack you're bound to have kids asking for seconds with some of these delicious new seasonal items.

We're back in the swing of things with some fresh, new menu items just in time for the kids to enjoy this coming fall. Our chefs worked all summer to come up with  fun and creative items to add  pizzazz to your menus. We love to know how the kids are enjoying new menu items and we're open to your feedback!

It's hot out there this summer so we're focusing on fresh, seasonal ingredients!  We've added several "cold" items to our menu such as refreshing salads and our version of the classic "PB&J" sandwich. Also, you might have already noticed how sweet and delicious the watermelon is and we're doing out best to keep it coming. Whether it be at camp or on field trips we know kids are on the go so we cater many of our new summer menu items off of that mentality. Check out the menu highlights below and tell us what you think!

Our chefs have been very busy in the kitchen coming up with new additions and we're so excited to share these with all of our hungry kids. We're bringing in new flavors and a bit of interactivity  for the spring season based on our schools' feedback and our chefs' imaginations. Read on to learn more about what you can expect to see on our upcoming menus.

At The End of the Rainbow... 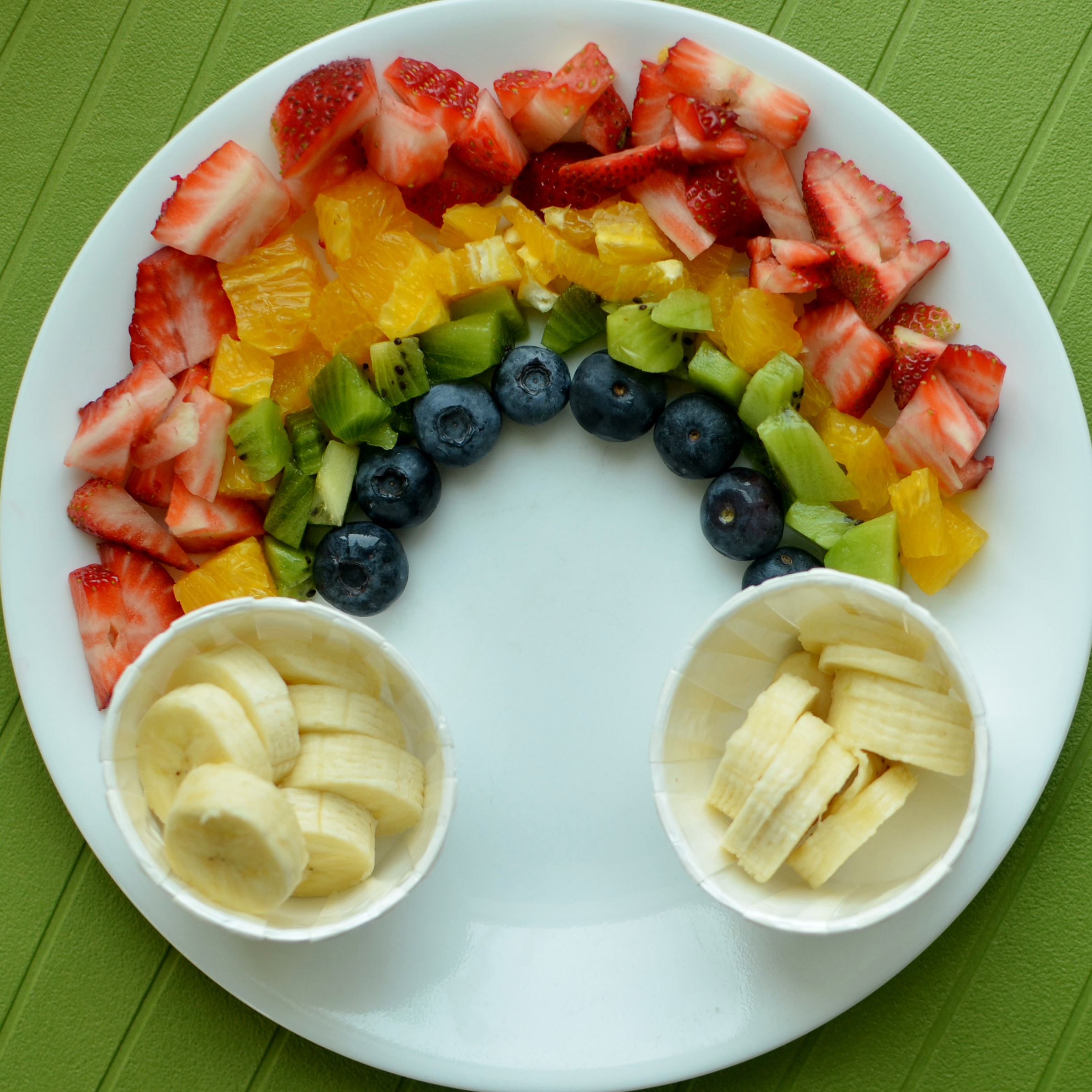 It's not just the green in our sauteed kale or string beans you've been noticing lately, it's your neighbors and friends beginning their St. Patrick's Day celebrations! We can't think of any better excuse to add extra green veggies to our meals than to celebrate such a fun and festive holiday, but we can think of a great family-friendly activity you can do with your kids.  Our favorite holiday tradition is creating the amazingly delicious, nutritious, and beautiful fruit rainbow!
END_OF_DOCUMENT_TOKEN_TO_BE_REPLACED
Comment

Whether it's joining the Meatless Monday movement or choosing to go vegetarian any other day of the week, our team at Red Rabbit knows that eating more plant-based meals is a nutritious and delicious way to try new things. This season, we're bringing some exciting favorites to the table. Let us know what you think!
END_OF_DOCUMENT_TOKEN_TO_BE_REPLACED
Comment

With Daylight Savings nearly a week away, we’re starting to notice the seasons changing - the crisp air (and apples) are leaving us craving hearty & warming meals. The Red Rabbit kitchen is embracing this transition with some of our most prized fall foods. END_OF_DOCUMENT_TOKEN_TO_BE_REPLACED
Comment

Veggie of the month: Corn

Ready for a corn-ucopia of knowledge? Sweet summer corn is truly something special. It's the kind of corn that's lined with row upon row of plump, firm kernels in varying shades of yellow and white that explode with sweet, fresh flavor the moment you take a bite.

Corn (scientific name Zea mays), called maize in Spanish, has been a staple ingredient in South, Central and North America for thousands of years. First domesticated over 8,000 years ago, corn has been a traditional food for Native Americans and is eaten in the diets of people living all over the world, including many populations in India, Mexico, Italy and nearly every nation in Central America.

veggies, corn, veggie of the month

This week the spotlight is on the New York Center for Child Development (NYCCD), one of Red Rabbit’s veg-tastic school partners!

During this spring semester, Red Rabbit and NYCCD joined forces to bring an extra dose of food and garden education to the school’s UPK classroom. Red Rabbit visited Ms. Lizzy’s and Ms. Patricia’s classroom each month to speak about certain foods featured that day on the Red Rabbit lunch menu.

Beyond the Veggie Kebab: Grilling with Veggie Burgers

Cooking out on the grill is an American summer past time, and as we approach sunnier days and warmer temperatures, grilling becomes part of the diet. Part of the reason for its popularity is surely due to the large amounts of meat consumed! For those of us who are following a plant-based diet or are simply minimizing their intake of animal proteins, how can we feel included in the cooking out without feeling singled out by munching on veggie kebabs?

Food Art with a Twist for Your Creative Kids

It’s one of the most challenging aspects of life that knows no social, ethnic or economic boundaries: getting kids to eat – oh, dare we say it – HEALTHY. Aside from the few food superheroes who try any food put in front of them, many kids  avoid anything and everything that looks green or orange, has leaves, or isn’t some dreamy concoction of cheesy pasta or finger foods. Faced with omnipresent fast food and junk food marketing, and the accessibility of processed food options, what are parents, caregivers and educators to do?

Day in the Life of Red Rabbit: Meet Chef Marisa!

This week we are proud to feature our Red Rabbit family, our very own Chef Marisa Wiker! Chef Marisa is one of our many talented cooks here at Red Rabbit. We sat down with Chef Marisa to find out a little bit more about how she became a chef, what she loves to cook, and her mother’s rule of thumb at meal time.

My father used to tell me, “The world would not be able to eat without 4 vegetables; potatoes, tomatoes, onions and garlic!”  Garlic? Really?

What's Cooking with Red Rabbit and Roads to Success!

Red Rabbit is back in our international kitchen, cooking up an eclectic mix of culinary delights! This winter, a group of Red Rabbit chefs-in-training is learning all about the diverse foods found around the world -- and right in their own backyards in New York City, a hub of global cuisines! This semester, the Red Rabbit cooking program with Roads to Success at PS 333 is highlighting cultures that are important parts of our lives, as well as the lives of our neighbors, friends and classmates.

One of my favorite things to do as a little girl was going out to lunch with my dad and three sisters every Saturday. Because we were a large family operating on a country lawyer’s budget (Mom was our “domestic engineer”), the restaurant was usually not a fancy one (there weren’t - aren’t - any Zagat-rated places in my small Illinois hometown). In fact, most of the time our destination was McDonald’s.

Fast forward 20-something years: rates of obesity have skyrocketed, unemployment has risen and thus the ability for many folks to feed home-made meals to their families has been hampered by wages not keeping up with inflation. This has led to a growing dependence upon fast-food restaurants to feed families on shoestring budgets, and while they are able to meet that consumer need, the highly processed, high-sodium and high-sugar-laden meals have long been suspected of exacerbating the increased rates of heart disease and Type 2 diabetes not just in adults, but in our children.

Want made from scratch meals delivered in two weeks?

Apply Today to get started.

What's Food Got To Do With It?